As originally planned, the launch of the Ethereum 2.0 beacon chain has been confirmed for 1 December. As a result of a rapid increase in ETH’s staking commitment, all prerequisites have been fulfilled and the participation of the crypto-community continues.

Ethereum 2.0 will be launched on December 1st.

It is official, the first phase of Ethereum 2.0 will be launched on December 1st, the date initially planned by the developers. In order to validate an online release on this date, the Ethereum 2.0 submission contract had to receive a minimum of 524,288 ETH and the participation of at least 16,384 validators.

Contrary to initial fears related to the low number of deposits in the contract, transfers to the contract increased considerably during the last day. In a period of just 24 hours, on 23 November, more than 177,000 ETH were deposited into the contract.

Today, November 24th, this increase in participation in the launch of Bitcoin Future Review continues. As the day is just beginning, more than 150,000 ETH have been staked by new validators. The interest is such that the million ETH mark could be crossed in the near future.

As shown in the graph below, the number of ETHs sent to the Ethereum 2.0 submission contract started to grow significantly from November 20th, reaching a record number of participants before the deadline: 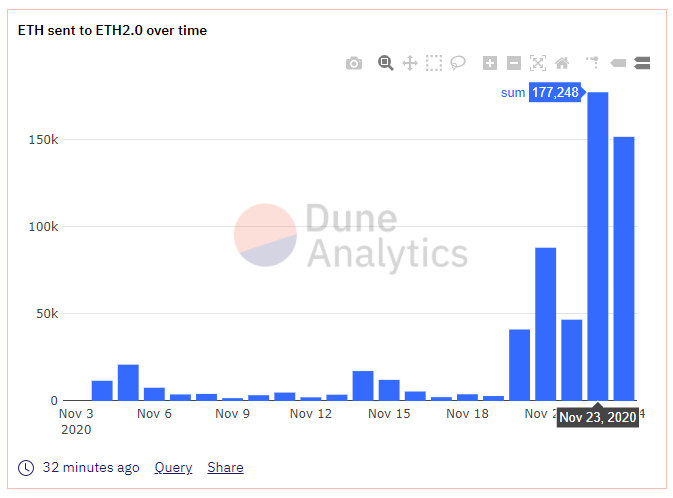 While the first participants in the network will not be able to retrieve their ETHs until Ethereum 2.0 reaches phase 1.5, many ETH holders are waiting for third-party services to help them with staking.

For this reason, among others, it is highly likely that the amount of ETHs locked for network operation will continue to grow. At the moment, the amount of ETHs engaged in staking represents only 0.5% of Ethereum’s $69 billion market capitalization.

While some networks such as Cardano (ADA) and Avalanche (AVAX) have 55% and 80% staking participation respectively, there is still considerable room for growth for Ethereum.